I attended a one-day cheese course run by Flavour Tastings and held at the Kappacasein Diary.

There were two parts to the day. Louisa Mason from Flavour Tasting took us through the material for Level 1 Academy of Cheese acreditation, and I'm now all set to take the exam. And Bill Oglethorpe from Kappacasein explained how cheese is made, and described how his business has evolved over the last few years.

I'm going to focus mostly on the cheese making part for this post. I'll cover the Cheese Academy course in a bit in more detail in a later post, perhaps when I've got through the exam ...

I have to admit that at the start of the day I didn't have much of a clue about how cheese is made, but Bill took a cauldron full of fresh milk, and by the end of the day, we had some rather nice fresh cheese.

Here's how it worked. The milk had come from some Kent cows early that morning, and starter culture bacteria had been added. Bill then put in a little rennet, and warmed the milk in a copper cauldron. Then after about 10 minutes, the first cheesy miracle suddenly occurred, the top of the milk became viscous; the curds were separating from the whey. Essentially what's going on is that prior to the coagulation, each milk protein molecule is curled up on itself. But acid produced by the bacteria, together with the rennet and the warmth, causes them to uncurl and they get tangled together to form a solid, which is the first stage of a cheese. That's what curds are. The remaining liquid is whey.

(Things becomes so much richer when they join together. Now I wonder what that could be a metaphor for? By the way, milk coagulation is irreversible, there is no Article 50 for curds.)

After a little while we started 'cutting the curds'. This helps the expel the whey and also contributes to the character of the cheese that will eventually form. In our case we just ran a knife through the curds in a grid pattern. At first the curds are quite fluid, but eventually it's clear that you are separating them into distinct lumps. 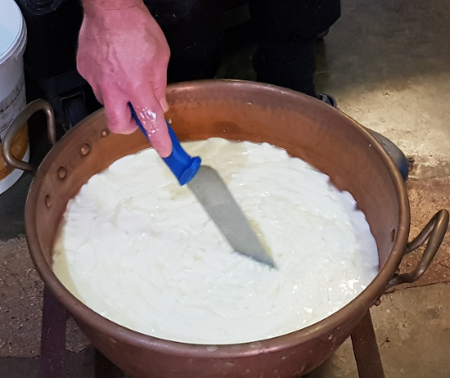 Next we removed the curds. Bill used a big spoon with holes in it, and put the curds into a mold about the size of a couple of house bricks. Finally he put a weight on top of the mold to continue squeezing out remaining whey, and left it until the end of the day when he turned out the fresh cheese from the mold.

Before I left, Bill cut off a piece for me and I took it home. Here it is on a cheese board playing with the big boys. It's the one on the centre left, just below the Jersey Blue. 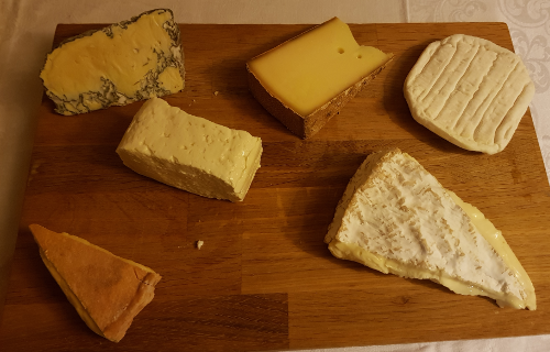 One common ingredient that wasn't added to this cheese - but usually is - was salt. I try to eat as little salt as I can, which can be difficult given the huge quantities of cheese I consume, but I rather enjoy the flavour of things that are salt-free. And although our cheese won't win any awards, it was very pleasant. Very like haloumi in texture (and squeekiness), but - unsurprisingly - not salty, and with a light fresh milky flavour.

This is the most basic cheese making process, and at every step there are variations that would have produced a rather different output. For example, we could have relied much more on the bacteria than on the rennet, and produced something that was the basis for a classic soft cheese. Or we could have heated up the milk and/or the curds, making a harder cheese. Most kinds of cheese would also require maturation for more than few hours - perhaps as long as a year or more for the harder varieties.

So that was the cheese making. The Cheese Academy course was also fascinating. Like I said I'll cover it in detail in a later post. But here are the headlines. The Cheese Acadeny is trying to create qualifications and educational opportunities for cheese people that compares to those provided by the Wines & Spirits Educational Trust (WSET). It is very new. And I think I was part of the very first cohort through the level 1 course (the more advanced courses are coming in 2018). Louisa was a great trainer. She comes from a microbiology background, which means there's some real hard science behind the foodie knowledge and enthusiasm. She took us through 25 or so cheeses, and explained how their character and taste can be systematically described using the Cheese Academy's categories. I'd like to provide at lot more detail and use it to enhance my own halting attempts to do same kind of thing - but I think I'd better check to what extent it is intended to be shared. Anyway, watch this space.