More cheese from Paris; some still in Paris. 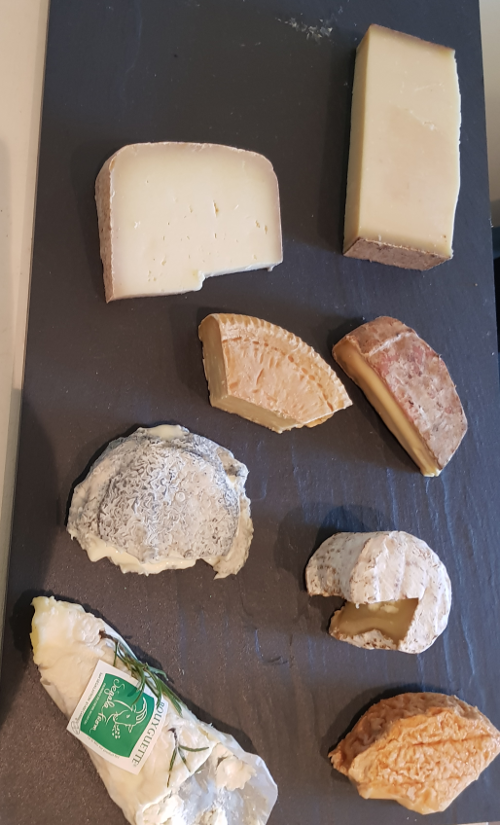 Brexit rant first. Then onto cheese, I promise.

I have to tried to write some more posts about Brexit, but found the subject too depressing. I don't have much to say. All that is happening now is the slow collision of Brexit fantasies with reality. That doesn't mean, I'm afraid, that it won't happen. Just that the consequences can only be various degrees of dire, from dismal to disasterous, and that it is becoming harder and harder to deny this. The more canny Brexiters are already trying out their narratives of betrayal to explain why the Brexit we end up with doesn't match the fantasy they promised; they are making deposits at the bank of resentment, so that when it becomes clear to all that our lives are getting worse, they can use their investments to mantain and build popular support (see, for example, Digby Jones).

They will have got Brexit, so what are the causes for which they are storing up this hate? What is the post-Brexit agenda to be powered by rage against the remoaner traitors, foreigners, and immigrants?

That is not too difficult to answer: More power to big business, a greatly reduced public sector with more 'market' involvement (large companies, in reality), signficant reductions in worker protections and rights, an end to environmental regulation, ... a low tax, low regulation neoliberal wet-dream. Look over the Atlantic, it's not just chlorinated chicken that's on its way.

I had a couple of work trips to Paris in the last few weeks. At the end of the first trip I bought a load of fine French cheese from Laurent Dubios, put it in the fridge of my Airbnb, and then took the Eurostar back to London, the cheese still in the fridge. Me: very unhappy. Airbnb host: gave me a glowing review.

I got the chance to go back a week later, and this time I didn't make the same mistake.

I bought cheeses from Laurent Dubois again, and from Thomas Fromagerie around the corner on Rue du Commerce. Laurent Dubois is a posh, expensive, cheese shop and affineur, with knowledgeable English speaking assistents; Thomas Fromagerie is more a local shop. I'm sure the assistants are knowlegable, but my French is so crap it's hard for the knowledge to be communicated.

Here's some fighting talk: French cheese shops have great cheese, but in some ways they are not as good as British ones. In good British cheese shops you are able to taste any of the cheeses they sell. And you are able to select the size of the pieces of cheese that you buy. In the French cheese shops that I know, neither of these things are possible. You're supposed to know what the cheeses taste like, and if they haven't already cut a size you want, well *gallic shrug*.

Still, the cheese was amazingly good.

Ossau Iraty Estive de Gabas Ossau Iraty is a popular Basque sheep's cheese. In fact it is widely available in British supermarkets. And although I like the supermarket stuff, I mentioned in a previous post that you can find stronger tasting, more farmyardy versions. This is at the end of that spectrum. Someone I shared a piece with said it smelt of a Somerset farm. And the taste matches. The best Ossau Iraty I've ever had, and one of my top cheeses.

Darley Frotte a la Biere Brune I don't think you'd find any version of this in a supermarket, it's made in small batches in Darley farm Brittainy. As the name suggests, the rind is washed in brown beer, giving a pleasnt malty edge to a delicious, savoury, unctious cheese.

Beaufort Chalet de D'Alpage I've eaten a lot of alpine cheeses, and this has to be one of the nicest. Creamy, smooth, silky, umami, a hint of bitterness and toffee. Beaufort, BTW, is the cheese that led to the notorous Fonduegate Incident.

Bouyguette This was one of the cheeses from Thomas Fromagerie. And an excellent reason for going back. A soft, slighly sharp goats cheese. Lactic, a little sour. Comes with a sprig of rosemary, which provides a suprisingly subtle contribution to the overall flavour.

St Nectaire Fermier This is a rich, fatty cheese, having a slight flavour of mould from the rind, in the way that a good cheddar sometimes has.

Tarentais Another top goats cheese. Goaty, salty, sharp, with a hint of metal.

Selles sur Cher Beautiful soft fresh goats cheese, with a two or three textures... Er, I didn't make any notes when I was eating it, and all I really remember is that it was lovely.