The cheese hasn't stopped. Brexit has been going less well. 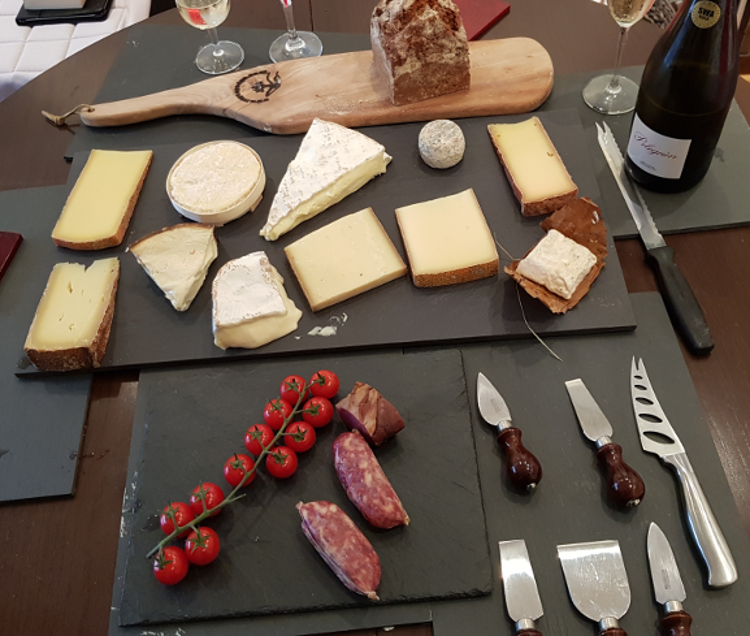 I blinked, and nearly four months passed. But although I've been lazy about adding more blog posts, I did successfully eat a lot of cheese.

Meanwhile, Brexit has not been going well, and like many people I've been following the process with a gloomy fascination which is transforming how I think about our democracy. Didn't politicians once have a clue about what they were trying to achieve? And despite compromise and mendacity, weren't there some recognisable values guiding their actions? At the very least, they were pretty competent at politics ... weren't they?

Certainly none of these things are evident in the Brexit process. We rushed into Article 50 giving us until March 2019 to leave, then despite early blather, we signed-up very quickly to the EU's sequencing. Sufficient progress on Ireland, EU citizens, and the leaving bill had to be agreed before moving on to trade and other areas.

Since then, what? The process was on hold for several months because of a miscalculated general election. We have found out the rest of the world isn't going to quickly sign advantageous trade agreements with us. And the countries of the EU27 aren't interested in undermining the negotiation process, German carmakers notwithstanding. And, yes, the sequence we signed up to, that's the order that things are going to have to happen. We did agree to it, remember?

Right now there is a debate whether there should be a transition period prior to a permanent terminal arrangement, or whether we should leave in 2019 without a deal. The remaining possibilities, theoretically speaking anyway, are moving directly to a permanent arrangement, extending the Article 50 period, or abandoning Brexit altogether.

These latter three possibilities are looking unlikely at present. A direct move to a permanent arrangement isn't going to happen because no-one has a clear enough idea of what that arrangement should be, and 17 months - the time we have before March 19th - is not enough for its definition, agreement, and implementation.

An extension of the Article 50 period is an outside possibility, but requires an admission of failure by the government. This might be something that happens if the present government falls, but otherwise probably not.

Abandoning Brexit is the only possibility that makes any sense from the point of view of economics, global strategy, and the rights and quality of life of people in the UK. The fact this is merely a theoretical and not a political possibility still shocks me every day. But that, unfortunately, is where we are.

That's why the debate at the moment is around transition and no-deal.

No-deal without preparation would mean, among other things, a collapse in trade, a massive economic recession, and, as a consequence almost certainly the end of welfare and NHS as we know it. On top of that, there is a large number of regulatory bodies we would drop out of, and as they are unlikely to be replaced, that will degrade the protection of the environment, our rights, and our safety. (No-deal with preparation wouldn't be good either, but right now there is no time or resources for much preparation, so that's not a practical possibility.)

Leaning about no-deal is similar to learning about the effects of nuclear war. It's grim but instructive. There have been some great blog posts about no-deal recently, but the one which made the greatest splash was Peter North's I don't like this Brexit, but I will live with it. North's post is clear-sighted and factually accurate, and contains a intriguing twist. Having correctly described the pretty terrible effects of no-deal, North welcomes the suffering they will bring. He's like a nuclear strategist arguing that massive human depopulation is, on balance, a desirable outcome.

Apologies for returning several times to the nuclear analogy, but, although I don't really believe that no-deal is equivalent to nuclear mega-death, there are several parallels. One of them is that at least some in the government intend no-deal to be acting as a threat. Their cunning plan appears to be that the possibility of no-deal will encourage the EU to reflect British interests in their framing of the deal. But this plan is flawed because the UK will be harmed more by no-deal than the EU27. Against hard-headed negotiators, threats of self-harm are not effective tactics. Threatening to blow yourself up is not the way deterrence works.

No-deal will hurt European countries, that's true. But as things stand it will hurt the UK much more. As things stand, the UK has made no serious efforts to create the institutions and infrastructure needed to mitigate no-deal. And there is not enough time to build those things. For example border control will need thousands more customs officers and much expanded storage capability - it'll take more than 17 months to employ and train the people, and to construct the roads and buildings. Meanwhile the chancellor has made it clear that no money is being put aside for this purpose. So the UK is making no effort to mitigate the disastrous effect that no-deal would have.

So one reason that the Tories talk about no-deal is the mistaken belief that it can be used to threaten the EU. But that's not the only reason. There are those who see it as something desirable. Who? Well outside government, Peter North, as I mentioned, believes it's good because the consequent suffering will strengthen and sharpen a feeble and decadent English culture. But within government there are those who want no-deal because of beliefs that are more ideological and recognisably mainstream Conservative than North's. This is the position of some free-marketeers who want to massively reduce the role of the state. They believe that the way to destroy a population's reliance on the state is to produce such economic damage that the state can no longer adequately deliver. That goes hand-in-hand with removing regulations, guarantees of workers rights, etc, etc. From these ruins, a society based on self-reliance and the free market will emerge. There are those in the Tory party who believe this is a legitimate strategy. They are building a bomb, and they want to set it off.

Putting aside ideology, who would benefit economically from this disaster? Well there are those whose business model is to buy assets whose price is low because of economic crises. For example, take the Sovereign Global Investment run by the Chandler brothers, two New Zealander billionaires. As Private Eye describes:

Sovereign was one of the first funds to pile into Brazil when the country opened to outside investors in 1991. It moved into Russia after the collapse of communism, and bought up assets in Japan and Korea during the banking crisis of the early 2000s

And funnily enough, Legatum, a think tank funded by Robert Chandler one of the owners of Sovereign Global Investment, is the favoured source of advice and information to hard-Brexit Tories, and has had regular meeting with David Davis and senior officials from the Department for Exiting the EU. (See, for example, this DExEU schedule.)

There are several well regarded blogs arguing that no-deal is a failed threat, and should not be and is not being taken seriously. For example this from Flip Chart Rick No-deal Brexit: it’s already too late. And Simon Wren Lewis's The myth of No Deal. But these arguments depend on the government not being driven by the extreme anti-statist strategy I mentioned earlier, or by the influence funds like that of the Chandlers.

So I think the possibility of a no-deal Brexit is not negligible, because in its current state of disarray I'm not at all sure that the government can stand-up to the political extremists and those who will benefit from their activities.

Still, although perhaps I'm clinging to the naive conception of the competence and goodwill of politicians that I mentioned at the start of this post, I do think that no-deal is less likely than a transition period. So what would the more likely prospect, a transition, look like?

There is a European Council meeting on 19th-20th October, a meeting of the leaders of the EU, and Brexit will be on the agenda. The way these things work, a draft is circulated in advance and then modified to some degree at the meeting. So arguments about what goes into the draft are an important political process. Britain would have liked to start negotiating the transition soon, and Barnier, the EU negotiator, argued that this would be sensible. However the idea was quashed by Germany. Instead the draft says that internal discussions amongst the EU 27 about transition can begin, but Britain is not part of that dialogue.

Meanwhile, an EU diplomat talking to the press said:

"The closer we get, the less there is to discuss about a transition and the more it just goes to a standstill transition, with Britain still in everything, but without a vote,"

And the FT has reported that such an arrangement could be agreed relatively quickly by he EU27, perhaps even by December, the time of the next Council meeting. And as another Council official said in relation to Britain's influence on all this (also reported by the FT):

"There won’t be much to negotiate, they can take it or leave it."

This tough talk is partly posturing of course, but it does show that the EU doesn't seem terribly frightened by the 'threat' of no-deal. Posturing aside, what is likely to be on offer in December?

I think that the EU 27 may sweeten the standstill transition proposition that it makes in December or thereabouts, by adding some points that are intended to be soft and negotiable, so that the UK government can 'win' those 'concessions' and present the transition negotiations as a victory.

So that's my tentative prediction: A process that starts in December with a transition proposal from the EU, some face-saving 'concessions' to May's government, and then for the next year or so, transiting to the transition, and trying to get down to the real business of defining the post transition reality.

I don't think this is a particularly good scenario, it's worse than abandoning Brexit altogether, but it it's better than a no-deal. And of course I'm not saying it's certain, for example the Council Meeting next week could in come up with something very different from the current draft. But given that I've written this rather long post, I will try to keep up with what happens next and if I can summon the energy, report on it in my next post.