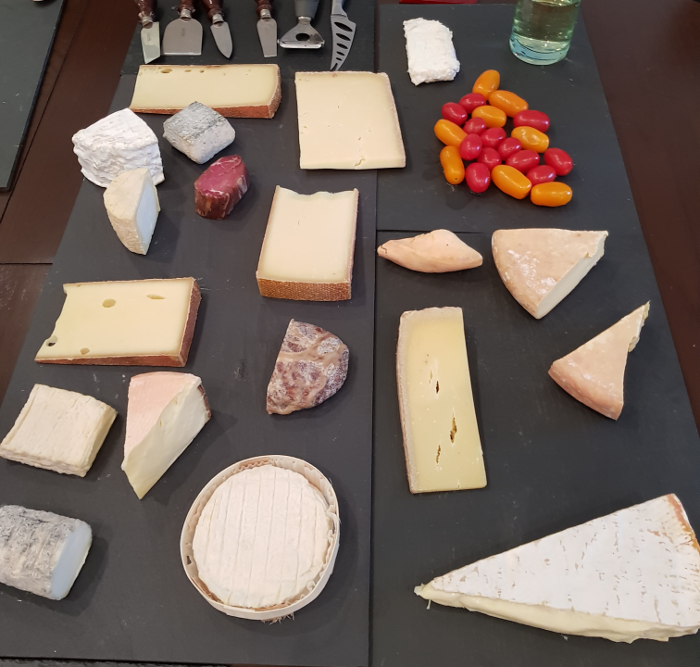 My previous post on the Flavour Tastings course I attended a few weeks ago, focused on the cheese making. In this one I'll say more about the Cheese Academy part.

The Cheese Academy is quite a new organisation, and it is aiming to have an analogous role to that of the Wine and Spirit Education Trust; promoting cheese, providing a descriptive vocabulary, and accrediting training courses for various levels of expertise.

What I want to discuss in this post is the framework being developed by the academy for describing cheese. Actually there are two frameworks; one intended to describe how a cheese is made, and a separate framework for describing its taste. Let's take these frameworks in turn.

For the first framework - corresponding to how a cheese is made - the academy has invented a system they call MPM. An MPM description consists of two parts. 'Make' (M) and 'Post-Make' (PM).

The first part, 'Make', refers primarily to the initial stages of cheese production, the ones I described the other week, which involve separating curds and whey. There are four 'Make' types of cheese. The types are mutually exclusive, a given cheese can only have one of them. The types are

I have to admit that there are aspects of this framework that I find confusing. The words 'Soft', 'Crumbly', and 'Hard' refer to a consistency. So apart from the last of them, these 'Make' categories do not directly describe a process, but rather the consistency of its product. For that reason, at the level we were learning the categories, in some cases I found them quite difficult to use. The early stages of cheese's production and its final consistency are not always neatly correlated. For example, I have had Crottins and St Maures that are pretty hard, easily as hard as a piece of fresh block cheddar, but they are classified as 'Soft'. And although Mozerella is classified as soft because it would seem absurd to call it anything else, the process by which the curds are separated in its production is quite similar to that used for hard cheeses. The course that we were taking was Level 1, perhaps some of my confusion will be cleared up when I get to Level 2.

The Post-Make part of a cheese description refers to what happens during storage, and to any further subsequent processing. The five Post-Make categories are:

Unlike the 'Make' categories, these properties are not mutually exclusive, so a given cheese can have more than one of them. Apart from the last one, a weirdly ungrammatical catch-all, they are fairly straightforward although I can't say I'm a hundred percent confident of their use in all cases. For example, is being soaked in brine 'Flavourd/Smoked'? I think so because Feta was characterised this way in the accompanying course material. Though Parmesan, which is also brined, was not. Perhaps I'll get clear when I ascend to a higher level.

So that's the part of a cheese description which characterises how it's made. There is a separate space for locating flavours. Two spaces, in fact. The Cheese Academy identifies two types of flavour: Simple and Complex. Both are organised as hierarchies, with more subtle distinctions as one descends the tree.

The simple flavours are those detected in the mouth, and the top level simple flavours are Sweet, Savoury, Salt, Bitter, and Acid. 'Sourness' is covered by 'Acid', and the distinction between, say, fruity acidity and lactic sourness are subdivisions of that general taste.

The Complex flavours are detected mainly by the nose. These too form a hierarchy, with the top level complex flavours being 'Dairy', 'Fruit/Flora', 'Vegetal/Herbeceous', 'Chemical/Mineral', and 'Other'. The 'Other' category is the most interesting perhaps, including as sub-categories: Meat, Human, Farmyard, Fish, Fermented, and Mould. Level 1 focuses only on the top level, so we didn't go into which parts of a human, or what kind of human, that particular flavour references.

It would be nice to use the Cheese Academy categories on this website to replace the rather ad-hoc system I've been using to date. That's ambitious though, and I need to work out a strategy for moving from what I've got the the Cheese Academy system. And I'd like to do something else in parallel. I need to correct a big problem with my current approach: I currently describe the flavours of given types of cheese, but that's not really good enough because the same type of cheese can taste very different depending on how it has been kept, and how long. So I need to somehow reflect that complexity in the tasting notes. That's ambitious too. But if I can think of a way of rolling this out step by step, then that's what I shall do. Watch this space.